Covid: Facebook link spreading vaccine doubts in the US

A news article about a doctor who died after receiving a Covid-19 vaccination was Facebook’s most viewed link in the US in the first quarter of 2021, a shelved report shows.

The New York Times claimed that Facebook initially held back its report because it would “look bad”.

Facebook replied that the delay was in order to make “key fixes”.

The company has released its report on the “Widely Viewed Content” report for the second quarter of 2021, in which it found a word search promising to reveal “your reality” and “question posts” were among the top 20.

New York Times has revealed that the company held back the report covering January to March 2021. 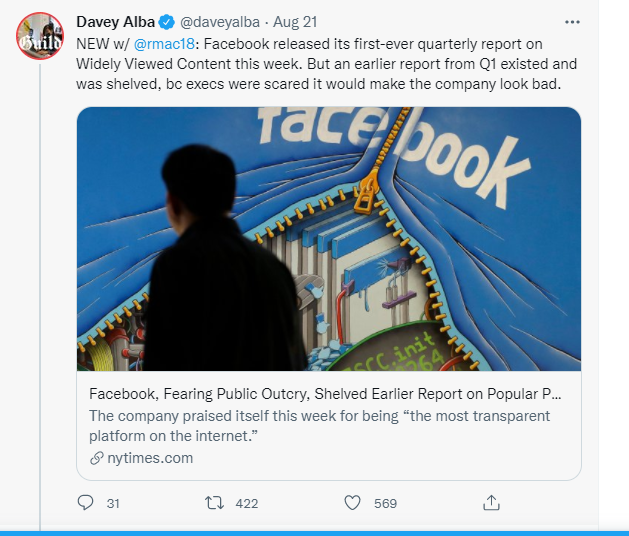 The article alleged that the report was intentionally shelved and not shared because of the fears that it would “look bad for the company”.

The most viewed link was an article revealing how a US doctor has died after receiving a covid vaccine published by a mainstream US newspaper. The link attracted nearly 54 million views.

The article was subsequently updated to reflect the findings of the Medical Examiner that there was insufficient evidence to conclude whether the vaccine was responsible for the death.

Heath bodies around the world have regarding the vaccine to be safe and highly effective.

The reach of this link establishes and reinforces the fact that how fertile a breeding ground Facebook can be for anti-vaccination content.

The promotion of stories like these has been exploited by the opposing groups that are anti-vaccination and will do anything to deter the public.

After the publication of the NY Times’ story, Facebook released the report.

A spokesperson for the company said: “We considered making the report public earlier but since we knew the attention it would garner, exactly as we saw this week, there were fixes to the system we wanted to make.”