According to Tiobe’s Programming Community Index for May 2021, Python is the second most popular programming language.

Why wait then? Let's dive in to read more about it.

Python has shown unexpected yet tremendous growth over the past few years. The programming language has become a developer favorite and has a promising future ahead. It has become an instant choice for the leading tech joints such as Google, Netflix, Instagram for web development.

According to Tiobe’s Programming Community Index for May 2021, Python is the second most popular programming language. Another survey showed “Popularity of Programming Language Index, “python grew the most over the last five years by 19.0%. 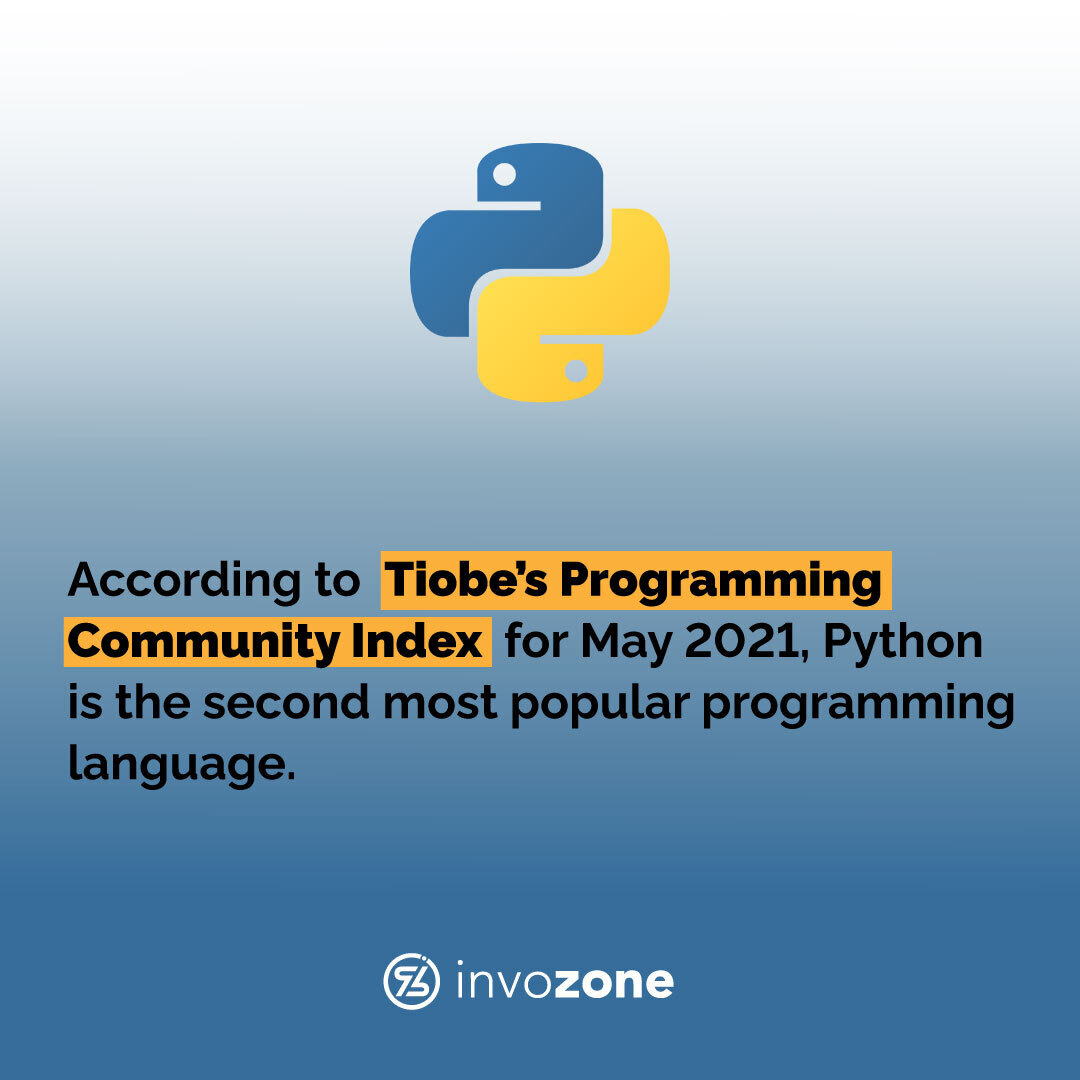 While you’re at it, give the linked below article a read for better understanding.

Read: WHAT CAN YOU DO WITH PYTHON PROGRAMMING LANGUAGE?

Python is an easy to learn, read, write and understandable programming language.

The readability of Python codes is higher than other and that is why it is easy for beginners. It uses indentation instead of curly braces unlike other programming languages.  Resultantly, this makes the code look clean and easy to understand.

The highlighting feature of Python is that it is an object-oriented language. It supports the concept of classes, objects and, encapsulation, etc.

Python comes with IDLE (Interactive Development Environment)  which is an interpreter and follows the REPL structure (Read-Evaluate-Print-Loop). It executes and displays the outcome of one a time which makes it easy to trace errors while you’re at it.

Python is not statically-typed and you don’t need to determine data type while defining a variable. The interpreter does this at runtime which makes things easier for programmers but can create runtime errors.

The standard library has many packages and modules with common and important functionality. You can facilitate from the library and don’t have to write everything from scratch.

You can also install packages from the PyPI (Python Package Index) for enhanced functionality.

Python has one of the largest and most interactive community on StackOverflow and Meetup. This is a great support in terms of accessibility as you can have your queries answered quickly.

The community does interact over queries and you might find answer to your queries from there as well.

Python is both extensible and embeddable when it comes to coding. You can use code from other languages like C++ in your python code.

This article will enlist a few to equip you with useful information regarding the best python frameworks for web development.

The full-stack frameworks provide one stop solution to all problems. It provides full support for all basic components; form generations, form validation, and template layouts.

These are lightweight frameworks with no additional features to offer. They don’t offer support for form validation, database abstraction layer and other such functionalities. Developers choosing microframework have to code additionally and add additional requirements manually.

It streamlines web applications development as it has some of the best features; colossal arrangement of libraries, reusability of components and less coding requirements make it one of the best frameworks to work with.

Recommended read: WHY DJANGO WEB FRAMEWORK IS THE BEST?

CherryPy has almost completed ten years while proving to be an exceptionally fast and stable framework. It is an open-source Python web web development framework with it’s own multi-hung server. It extends support for all the frameworks that support Python.

It allows developers to quickly build a smaller source of code to form a reliable database. It comes with controller modules and a setup framework making data access, file uploads, templating engines and handling of sessions easier.

It essentially is a microframework for Python following the MVC pattern. It doesn’t just show support for newer versions of Python (starting from version v-0.11), but includes support for Jinja templating, Werkzeug WSGI toolkit, and the Blueprints system.

Bottle is one of the best Python web frameworks in the category of small scale frameworks. It was originally developed to build web APIs. It executes everything in a single source document. It follows the model-view-controller (MVC) architectural pattern which includes routing, caching, and template support features.

It helps developers build simplistic personal use apps while making them learn the most useful Python frameworks and prototyping. Netflix has used Bottle to build its web interfaces.

The popularity of the pyramid framework is growing with each passing day and experienced developers are making use of the framework. It runs on Python 3.  It follows the model-view-controller (MVC) architectural pattern. It is known for its flexibility and modularity that perfectly suits the development of large-scale applications. The framework is compatible with Python version v-0.24 and above.

JavaScript vs Python for Web development: Which One to Choose?

It is a never ending debate in the developers’ community that which one of the two programming languages is better? It is understandably quite difficult to quote one as the clear winner because they have their own features and strengths. For more in-depth review, read the down below linked article.